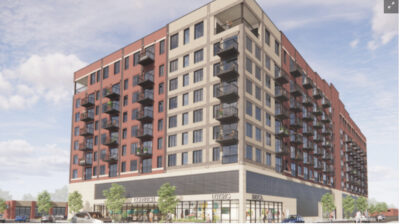 Sunflower Development Group and GSSW Real Estate Investments, an Americo Life company, are progressing toward a fall 2022 delivery for the first residences in Oxbow, a $49 million, nine-story infill project southwest of 18th Avenue and Swift Street.

Crews now have two construction cranes in the air and have built up four stories on the 1.37-acre site’s east and west ends since work kicked off in March. In late October, North Kansas City officials transferred the former public parking lot to the developers after a 2018 request for proposals to redevelop the property.

“From the moment we responded to the city’s request for proposals, the 18th and Swift project has been an exciting opportunity to develop a Class A apartment tower in the heart of North Kansas City’s exploding downtown urban core,” Mark Moberly, Sunflower’s director of development.

For the full article go to the Bizjournals.com.