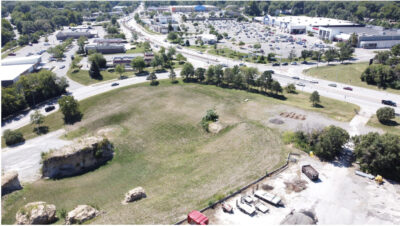 Nearly three years after the committee tasked with exploring options for the site reported a persistent lack of interest in the site from developers, a new mixed-use development proposal is underway for Roeland Park’s former pool site, known as The Rocks.

Developing the site has proved difficult because its topography makes building difficult, Swords said. The site has caves and what the city calls “significant elevation change,” which would require extensive grading and other site preparation for construction.

But Swords said the area surrounding the site was “just more walkable today than it has been,” improvements have been made in the area, and “Johnson County is finally seeing some infill transactions.”